Some pictures from our footage yesterday in an abandoned beer factory in London. We had magical creative times… thanks to our wonderful video director Anton Short. First images we’ve seen… look awesome! Awesome let me tell you! 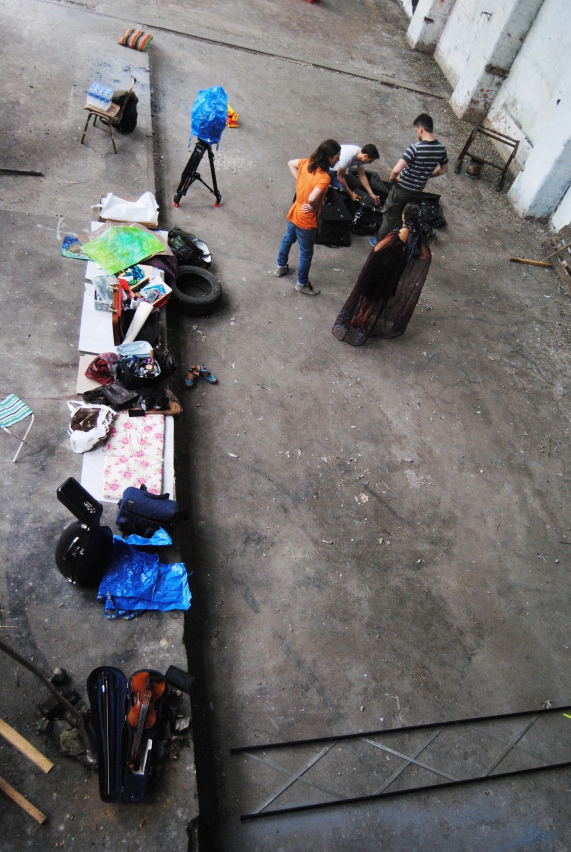 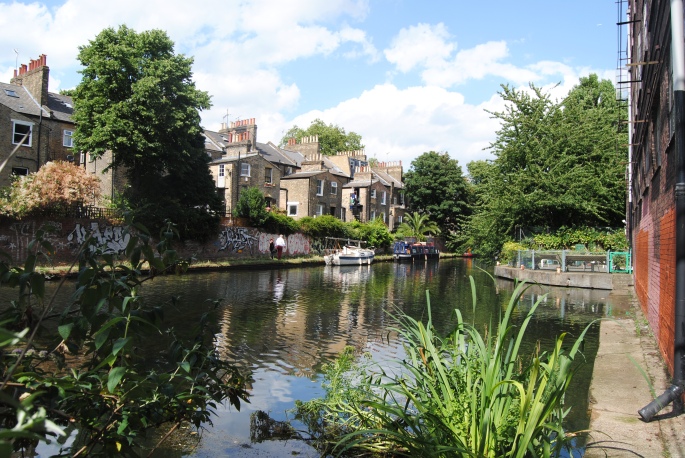 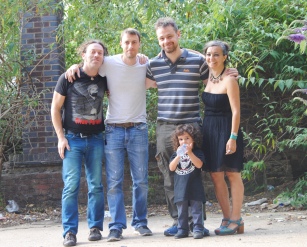 Let’s talk today about busking in the German world, which means Germany, Austria and Switzerland (sorry, I will not be talking about german minorities from Hungary, Czech republic, Romania or Serbia…).

Germany : it seems that there’s no particular regulation as far as I know (maybe I’m wrong !), but what I can say is that you should never busk in front of a bank or a jewellery. You’ll get kicked off by security staff even before you start playing ! 😉 I had this experience in Ulm.

The other thing I know from my own experience : don’t expect to earn much money from busking in Germany ! It is a very different atmosphere compared to Greece (for example), my feeling (maybe wrong) is that people look somewhat anxious !

Switzerland : Rather complicated, each city has its own rules. You may generally be supposed to ask a permission from local authorities, to pay around 70CHF for their agreement, plus around 7CHF per busking day. Beware ! Unless you know tips from experienced buskers, for example “wild” busking is allowed in Basel after 7pm !

Austria : When no regulation (Salzburg), you’ll be competing with local gipsies. People obviously fed up wouldn’t even notice your presence !

A different situation in Innsbruck, where people may be quite sensitive, unless you perform in the main touristic street (Herzog-Friedrich straBe), full of Asian tourist, they won’t drop you a single Euro (I tried ;)), maybe unless you play major-scaled accordion dressed up in a Tyrolean traditional costume !

Let’s point out something else : I have nothing against Tyrolean music, its major scales and its highly non-modal structure (1) ! I can prove it, we found a pub with a session inside with local musicians :

Graz : They have special regulations. The police was extremely friendly and gave me this brochure, specially dedicated to buskers ! Thanks to local authorities for their extreme devotion toward buskers 🙂 ! Everything you should know !

(1) According to me, breton music and kurdish music for instance, are much closely connected than Breton and Fado, or Breton and Tyrolean music, which are TRUE western music 😉 !

Music: Harzic in Bollywood (adapted by Yann Gourvil from a traditional tune from Central Brittany)

Let me start a new topic let’s say busking-oriented. What you have to know before busking in any european countries… When touring, I always want to give a try, it’s always a good way to feel the ambiance and meet people, in other conditions than in a concert place.

Each country has its own rules or regulations regarding street performances such as busking. If for instance, UK is a quite “busker-friendly” country (see this older post  ), it may be another story in other countries…

Let’s start today with Greece ! Greece is actually a good example to convince you (and myself) that it’s always usefull to know the local regulations.

I must say I’ve been busking so many times in the centre of the same city, which is really a pleasure as people are extremely friendly with buskers. They smile at you, even old retired people give you coins, although most of them got their pension reduced by a half because of Troïka.

But last time, after 15 minutes busking, police asked me whether I had an authorisation !! I’m almost sure I saw the police ten times at least in this street ! As well as many buskers, and without any problem ! And none of my greek friends ever told me about these rules…

They asked me to follow them to the police office. A bit rough in the beginning, just treated as a beggar, and I don’t mean a beggar deserves being treated this way even though they got much more friendly at the end, when they realised I was not busking in order to bother people, but mostly for my own pleasure. “But you’re selling CD’s, that’s illegal !” “Don’t worry, I haven’t sold any !” I said… I wonder if the right reply would have been “Do you get a receipt when you leave a banknote on the icon of the Virgin in a church ?” but I might have gone into deeper troubles 😉 !

After one hour and a half filling forms, they kept… 1€60 as a proof, and told me I’d receive news from the court (Yes !) within… two years ! OK, nothing dramatic, but if you’d like to try busking in Greece, please ask for your agreement from local authorities before !

A few weeks ago, time had come for us to go to the east of France and get our prize from the Jotinette contest, which actually was a perfect excuse for us to go and meet musicians from this area ! Not only we met them and had great time there, we even recorded a demo for one of their bands called Hop Corner. They play traditionnal Irish folk music.

I thought it could be quite a challenge as well as a valuable experience to record and mix a band in an extremely acoustic setup (fiddle, irish flute, bouzouki/guitar), which is somehow far opposite from what I am used to do with Astrakan Project…

The recording was made “live”, with stage microphones, actually what was available in the house !

It was actually a nice and extremely friendly recording session, followed by a couple of days mixing / mastering…

And this is what it sounds like, we hope you will like it as much as we do !

You can hear their full 5-track demo from their website, and it really worth it : http://hopcorner.fr/

We had a nice session with La Contrebande, a nice folk band from the east of France. As they would like to add breton dances to their repertoire, we had a nice workshop about those deep rooted breton dances called “gavotte” and “plinn”… 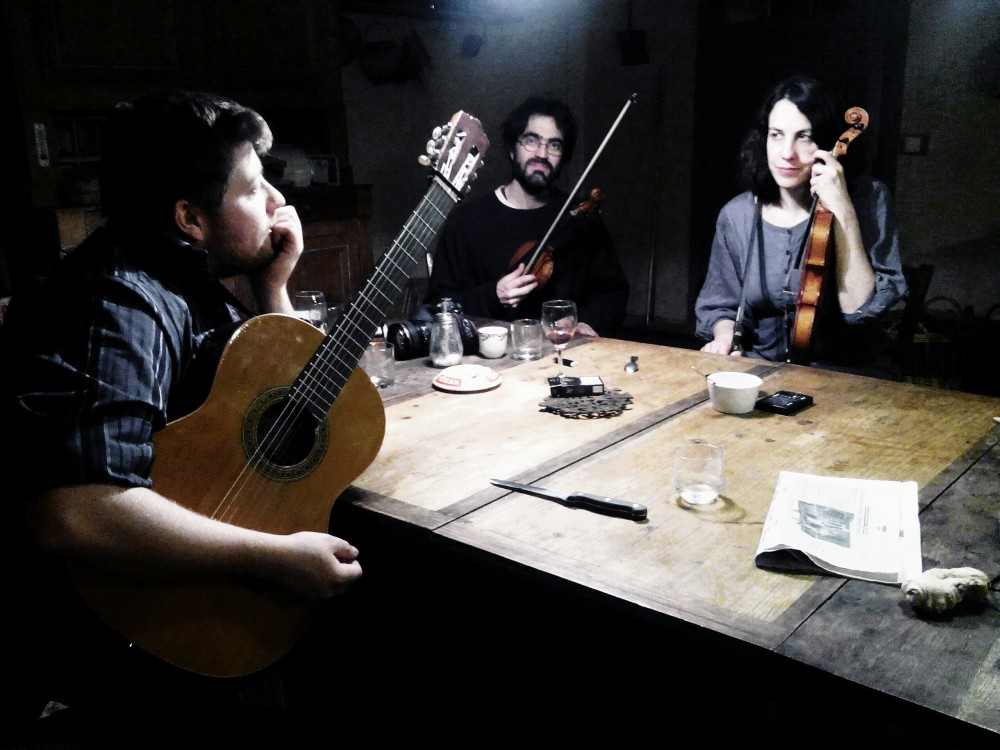 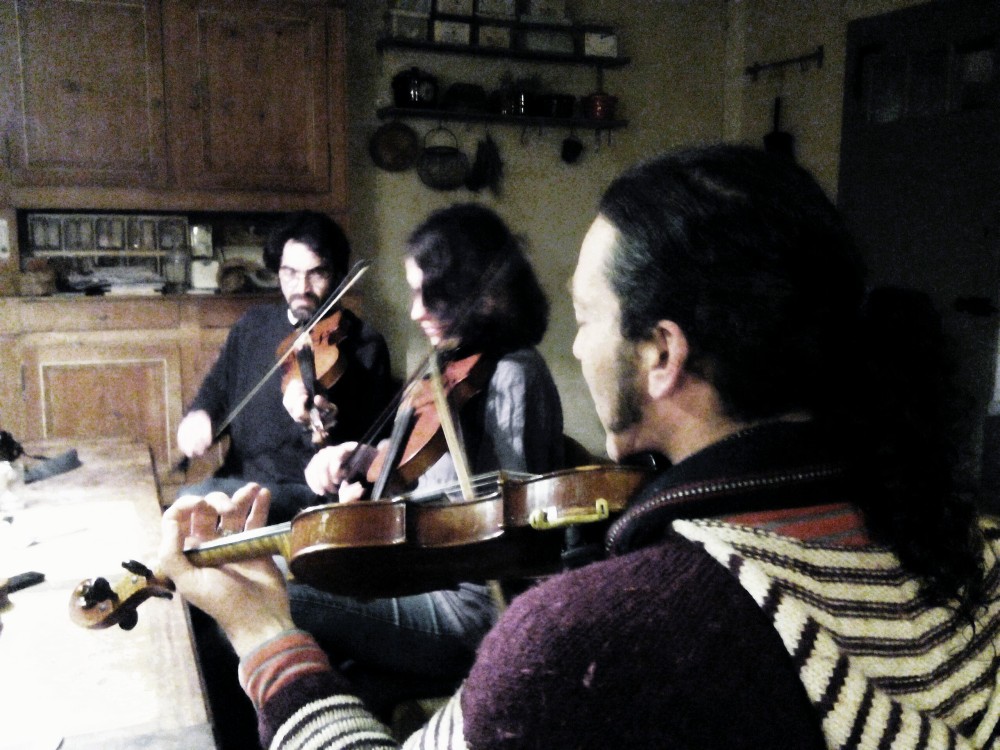 There were actually many fiddlers there… 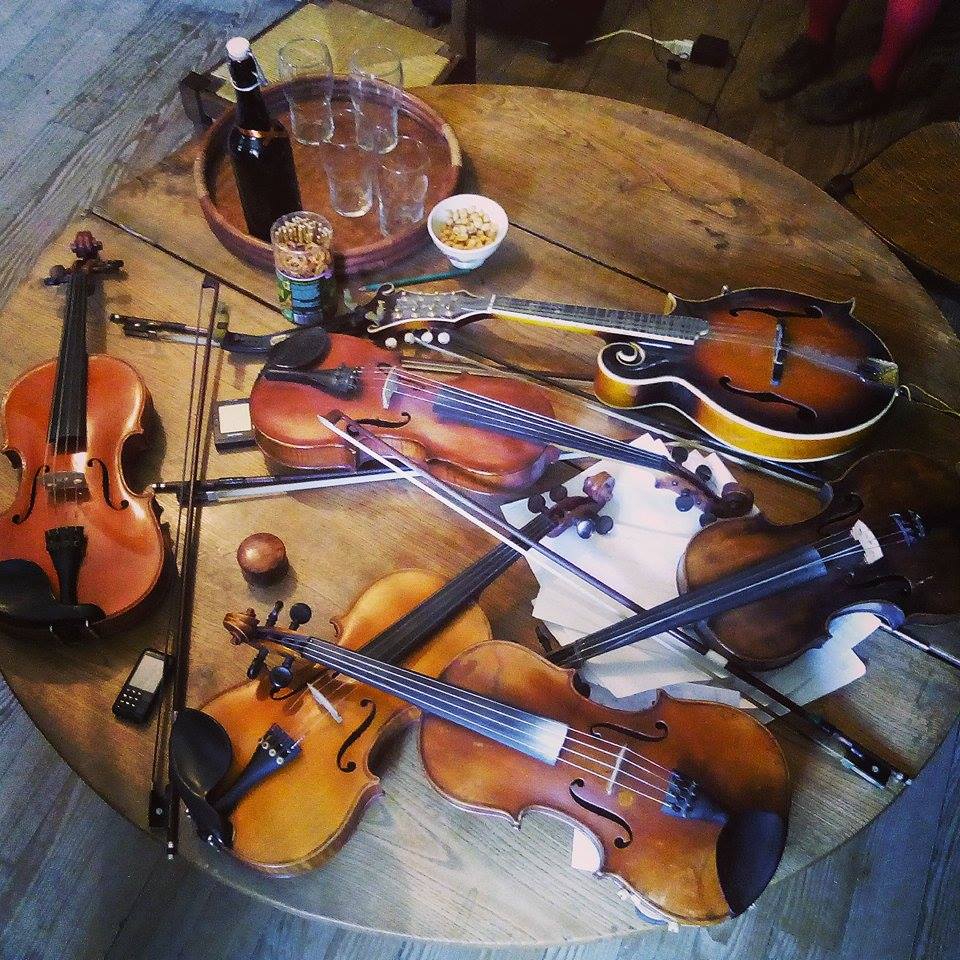 Simone and I are looking forward to hear the breton sets they will shorlty set up !

You can listen to their band there :

Yes, everything may happen in this world ! We met Peppe Lovino last week as I was busking in Cardiff’s main street (Wales – UK), who is a student currently setting up an international documentary about busking.

I must say that for musicians  – professionnal or not -, street busking is something pretty usual as well as recognised in the UK, also a reason why we distinguish “busking” from “begging”, which is supposed to be totally different. 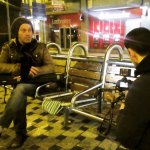 According to Peppe, buskers have in many cases very interesting and unusual experiences to share, which gives enough reasons and material to build a full documentary about it. This is a first rush of his footage :

You may have noticed that I mostly play irish music while busking, I indeed use this time to play some of my favourite irish tunes, and to intensively practice my irish fiddling under hard conditions (for example, the weather was freezing like hell, as you can see by the fact that I was wearing woolen gloves, specially designed and made for winter busking by Simone 😉 !

We got again 4 stars for our “B” album in Songlines current issue, again! I guess… we can celebrate, right? 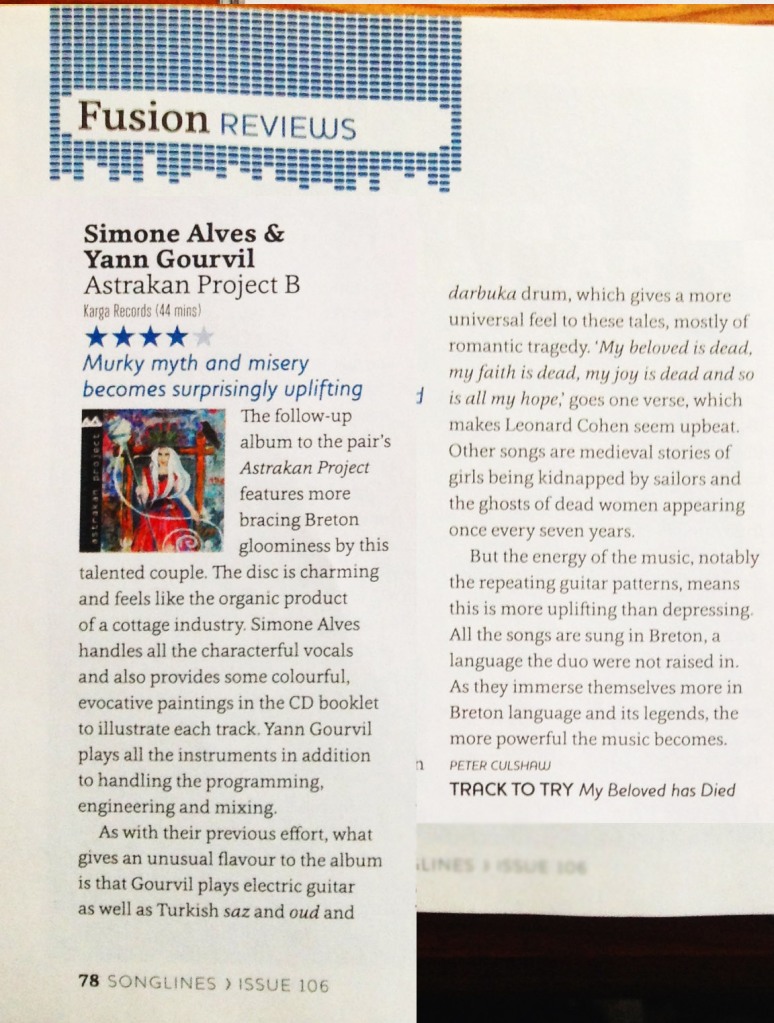 Last wee-end we were in Luzy, in the middle of the Morvan area (France), famous for “bourée” dances, among which…. the now very famous tune called “La Jotinette”, for which we had made a version+video that won the competition. We were really proud, but above all really happy to go there and meet many awesome musicians.

To watch again our version …

Thank you all again for your support and for sharing and voting for our version – we’ll meet all the members from the band La Contrebande from which we were only a couple of votes ahead to share our price – and probably play some music too!

There was an error retrieving images from Instagram. An attempt will be remade in a few minutes.